A month ago, my wife and I took our long awaited trip through the heart of Italy.

We decided that we would visit the Vatican Museum, even though we had been there before (albeit almost 10 years ago) because the lines are long and crowds build throughout the day. And there is so much to see, like Le Louvre, you can’t really see all of it in a single visit.

And tour guides are always helpful, as they can fill in the missing information on what you are looking at or provide useful advice. For example, you would never just wander in to the Sistine Chapel, it is located down a long series of narrow stairwells. And two rules apply once you are in there: no talking and no photography.

When asked why no photographs were allowed, our guide replied that when the Sistine Chapel was restored (starting in 1980), 1 the Vatican could not afford the full cost of restoration, and therefore assigned the copyright to the company performing the restoration.

Needless to say, my copyright lawyer’s eyebrows just about went through the top of my head. “How did they do that?” I asked. “The paintings on the Sistine Chapel ceiling are 500 years old. The copyright, if any, would have long ago expired.”

To this, there was no real response.

But could it be true? I resolved to find out.

As with all stories of this type, there is at least a grain of truth to them. Under American copyright law (which of course does not apply here), you can have a copyright in an “art reproduction.” 2 But does this apply to an “art restoration?” After all, the intent is not to create a new copy of the work, but to buff and shine the work so it looks as good as possible. In looking further, it seems not. The Copyright Act provides that:

“Pictorial, graphic, and sculptural works” include two-dimensional and three dimensional works of fine, graphic, and applied art, photographs, prints and art reproductions… [s]uch works shall include works of artistic craftsmanship insofar as their form but not their mechanical or utilitarian aspects are concerned…” 3

So, is there “artistic craftsmanship” and skill in performing and art restoration? Certainly. But how do you separate this from the “mechanical and utilitarian aspects” of the same restoration? Hmm.

But could the Vatican still have done this? Could they grant a copyright to the art restoration firm?

Well, of course they could. Because the Vatican City is more than just a city, it is its own country. 4 And it is ruled by the Pope as the Absolute Monarch of the Vatican City. 5 He can do whatever he wants. However, he cannot levy taxes, which figures into our story. 6

So what really happened was that the Vatican sent out bids for the restoration.

“The winning offer came from the Nippon Television Network Corporation of Japan (NTV). They offered $3 million (which eventually increased to $4.2 million) and no one was able to match them. In fact, at first, the deal was ridiculed by many.

However, in return for funding the project, Nippon TV got exclusive rights to all photography and video relating to the work. This meant the process of restoration itself and all the final restored art.” 7

So, thus comes the famous “they gave them the copyright to the Sistine Chapel” part of the story. Giving NTV the copyright is one thing. Preventing tourists from taking pictures is something else. The first prevents reproduction anywhere, by any means, no matter how obtained. Controlling the space, and preventing tourists from the taking of pictures is something else.

Also note (and unless you’ve been there you would never know), the Sistine Chapel is so huge that it is impossible to take any kind of decent photograph of the entire ceiling. You would have to lie on your back (as Michelangelo did) and politely request that the throngs of tourists surrounding you not crowd your shot. And all this must be accomplished before the guards (and they are a legion) make you get up.

But of course, the Vatican City gift shop will be more than happy to sell you a high quality photograph of the entire ceiling.

Further nixing the whole “they gave them the copyright” story is that the deal with NTV had an incredibly short term. The exclusivity period lasted only three years from the completion of each phase of the restoration. 9 All of which expired before the year 2000. 10

So the usual response for not allowing photographs is that the flash will degrade the images. Yet with today’s high quality phone cameras, a flash is no longer needed. If fact, a few kilometers up the road, in Milan, the church containing  DaVinci’s “The Last Supper” does allow photographs, as long as flash is not used. And believe me, “The Last Supper” is in much worse shape than the Sistine Chapel.

All of this is not to knock our tour guide, who was very informative. In fact, one of the lesser known points is that Michelangelo had a very contentious relationship with the Pope while he was painting the Sistine Chapel. So much so that one panel has a fairly obvious insult directed at the Pope. The panel in which God creates the Sun and the Moon depicts God in two different poses. However, in the pose to the left, God’s tunic is not very tight fitting. So much so that God’s entire bare buttocks are aimed right at the viewer, in this case for the Pope. In modern parlance, this is known as “mooning.” 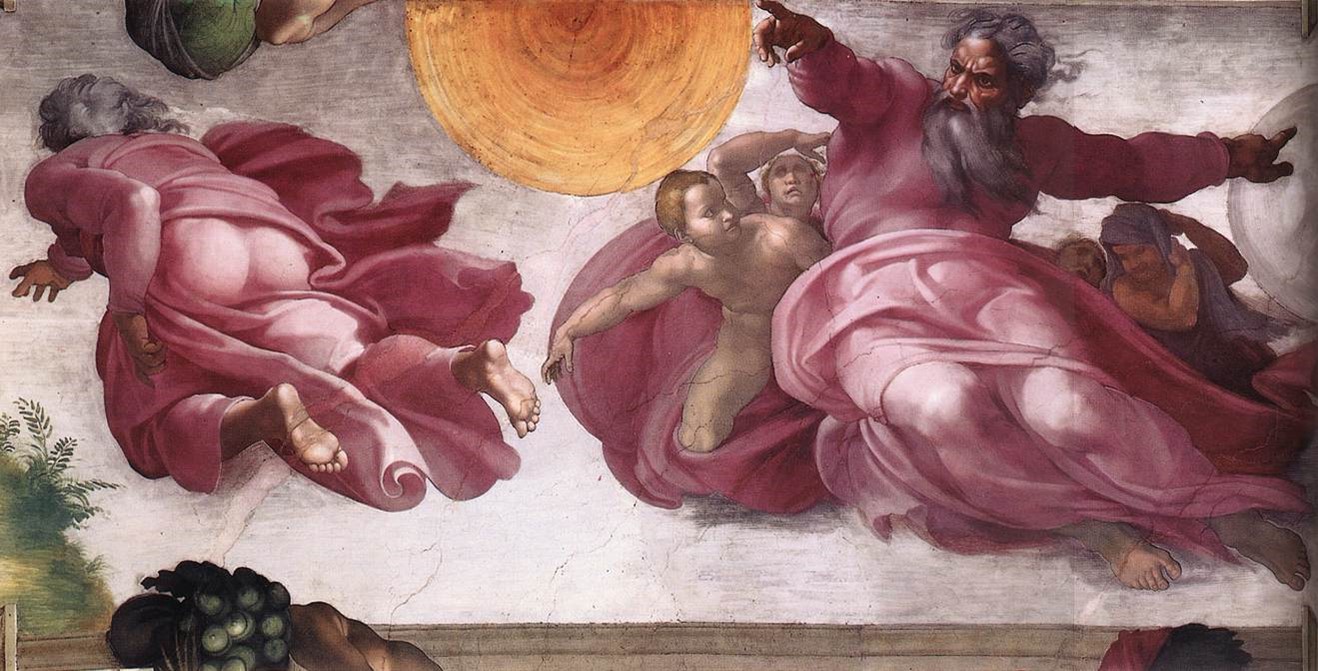 Some insults, even centuries old, never go out of style.