On June 9, 2017, a District Court Judge in California denied a Motion to Dismiss claiming that a “mash-up“ of Dr. Seuss and Star Trek was fair use. 1 The book, titled Oh, the Places You’ll Boldly Go!, attempted to “mash-up” (or should that be “mind meld”?) Oh, The Places You’ll Go! from the legendary children’s book author with various elements of the fictional universe of Star Trek. It is worth noting at the outset, that one of the Defendants responsible for the mash-up is David Gerrold, writer of the famous Star Trek episode “The Trouble with Tribbles.” 2

So wouldn’t a very experienced author know that they were getting into trouble? It seems so. Their Kickstarter page contained this caveat:

“While we firmly believe that our parody, created with love and affection, fully falls within the boundary of fair use, there may be some people who believe that this might be in violation of their intellectual property rights. And we may have to spend time and money proving it to people in black robes. And we may even lose that.” 3

As Mr. Spock would say…this appears to be logical.

Yet, there is this strange assertion on the books copyright page:

“Copyright Disclaimer under section 107 of the Copyright Act 1976, allowance is made for ‘fair use’ for purposes such as criticism, comment, news reporting, teaching, scholarship, education, research, and parody.” 4

The problem with this is that it’s not true. Nowhere in Section 107 does the word “parody” appear. Certainly parody, as an element of free speech can be fair use, but not all claimed parodies are in fact fair use. And as we have seen before, simply calling something a “parody” or “fair use” does not make it so. 5

In fact, Dr. Seuss Enterprises has been down this road before, and in the very same District Court that now considers this case. That case pitted Dr. Seuss against an alleged “parody” of the O.J. Simpson trial, all written in the style of Dr. Seuss, resulting in a book The Cat NOT in the Hat! A Parody by Dr. Juice. 6

As previously recounted by this blog:

“No actual text from any of Dr. Seuss’ works were used, only that the words were written in a similar style. For example instead of ‘One Fish, Two Fish, Red Fish, Blue Fish’ the offending work served up ‘One Knife? Two Knife? Red Knife Dead Wife.’ The design of the book’s cover was imitated, yet the only element that was copied directly was the scrunched up stove-pipe hat worn by the Cat. The cover of the book plainly stated it was ‘a parody’ attributed to a ‘Dr. Juice,’ yet another play on words that had the dual effect of sounding like ‘Seuss’ but also playing upon Simpson’s nickname as a pro football player, ‘The Juice.’ The trial court, affirmed on appeal, held that none of this was a ‘transformative use.’ Further, despite the fact that the Defendant’s book was clearly labelled in large type ‘a parody’ (thus one would not mistake one book for the other) and the rather obvious fact that the two works could never conceivably compete with each other in the marketplace (you would never give your six year old The Cat Not in the Hat), the 9th Circuit summarily dismissed this point by stating that the Defendants had failed to provide the necessary evidence on this point, and blithely stated that the District Court finding was not ‘clearly erroneous.’ I also suppose neither Court ever considered the fact that whatever copying was done was pretty much de minimus. My best guess? Both the trial Court and the Appellate Court found the book to be in poor taste and ruled accordingly.” 7

So this case, with extensive copying, should be a slam dunk, right? You’d be mistaken about that.

Quite surprisingly, the Judge here basically ignores Cat NOT in the Hat. The Court makes a primary citation to the Cat NOT in the Hat case only once in the entire opinion. Further, this mention is for the unremarkable proposition that the Court can resolve fair use issues on a Motion to Dismiss. 8 Interestingly, the Plaintiffs opposed hearing the fair use claim on the Motion to Dismiss, objecting that proof of “market harm” under factor four will require discovery. 9 We will return to this point later.

The Judge leads off by concluding that, despite the protestations of the Defendants, Oh, The Places You’ll Boldly Go!, to the contrary, OTPYBG is not a parody.

“Such works [mash ups] may, of course, also be parodies when they juxtapose the underlying works in such a way that it creates ‘comic effect or ridicule.’ (citation omitted) However, there is no such juxtaposition here; Boldly merely uses Go!’s illustration style and story format as a means of conveying particular adventures and tropes from the Star Trek canon. And although Defendants argue generally that ‘Boldly uses Dr. Seuss’s own works in service of a group-oriented counterpoint to the Go! individualist ideal[,]’ (citation omitted), the Court cannot conclude that such a ‘parodic character may reasonably be perceived.’” 10

Yet, because this is a fair use case, we once again find ourselves stuck in the quagmire of “transformative use.” 11

“But although Boldly fails to qualify as a parody it is no doubt transformative. In particular, it combines into a completely unique work the two disparate worlds of Dr. Seuss and Star Trek.” 12

“Go!’s rhyming lines and striking images, as well as other Dr. Seuss works, are often copied by Boldly, but the copied elements are always interspersed with original writing and illustrations that transform Go!’s pages into repurposed, Star-Trek—centric ones.” 13 To get a sense of what the Judge is talking about, here is an illustration specifically discussed in the opinion: 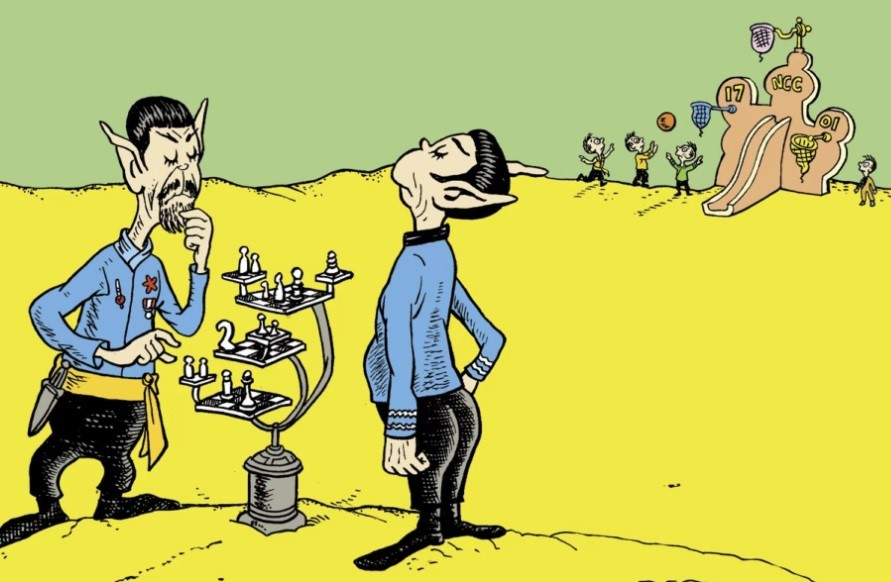 The illustration style is clearly that of Dr. Seuss, right down to the lack of straight lines as evidenced by the droopy baskets in the background. But the characters in the foreground are clearly Vulcans and the NCC 1701 is a reference to the Enterprise.

Wait a second here. Remember The Cat NOT in the Hat? There was virtually no copying of anything from a Dr. Seuss book, save for the Cat’s trademark scrunched-up stove pipe hat. The 9th Circuit, in binding precedent on this Court ruled this to be not transformative. But now faced with extensive copying from the very same author, the District Court rules this is transformative. So transformative is this use that the very commercial purpose of the Defendants’ work did not prevent a finding by the Court that the “Purpose and Character” of the use favored the Defendants. 14

The Court finds the second factor the “nature of the work used” favors the Plaintiffs only slightly. 15

As to the third factor, the “amount and substantiality of the portion used,” the Court once again is unable to escape the transformative quagmire.

“In the present case, there is no dispute that Boldly copies many aspects of Go!’s and other Dr. Seuss illustrations. However Boldly does not copy them in their entirety; each is infused with new meaning and additional illustrations that reframe the Seuss images from a unique Star-Trek viewpoint. Nor does Boldly copy more than is necessary to accomplish its transformative purpose.” 16

But the case cited to for this proposition, the well-known Campbell v. Acuff-Rose case, is about parody. The Court has already ruled that OTPYBG is not a parody, but now reaches back to treat it as if it is a parody. This confusion leads to the ruling that this factor weighs in favor of the Defendants. 17

Now comes the most curious part of the opinion. In analyzing the “effect of the use on the potential market,” the Court claims to be hamstrung by its decision to rule on fair use at this very early point in the case. The Court rules correctly that “Boldly does not substitute for the original and serves a different market function than Go!” 18 but that:

“In the current procedural posture Defendants are at a clear disadvantage under this factor’s required analysis… In particular, Plaintiff’s Complaint alleges that “[i]t is not uncommon for DSE to license” its works, including in “collaborations with other rights holders.” (citation omitted) And although Defendants might well be able to ultimately disprove this statement as it applies works of Boldly’s type, there is not currently any record evidence on this point.” 19

Which is exactly the reason why the Plaintiffs objected to hearing the fair use claim on a Motion to Dismiss!

Nevertheless, this works out for Dr. Seuss, since the Judge must at this stage assume all the facts pled by the Plaintiff are true, the allegations of the complaint regarding negative market effect tip factor four in favor of the Plaintiff.

“Ultimately, given the procedural posture of this motion and near-perfect balancing of the factors, the Court DENIES (emphasis original) Defendants’ Motion to Dismiss. Specifically, without relevant evidence regarding factor four the Court concludes that Defendants’ fair use defense currently fails as a matter of law.” 20

The use by the Court of the word “currently” leads me to believe that the Court will reconsider the question of fair use somewhere down the line. So, the copyright portion of the case will proceed, but remember, since fair use is an affirmative defense, the Defendants will bear the burden of proof. But the Court considers this a close case.

“This case presents an important question regarding the emerging ‘mash-up’ culture where artists combine two independent works in a new and unique way… Applying the fair use factors in the manner Plaintiff outlines would almost always preclude a finding of fair use under these circumstances. However, if fair use was not viable in a case such as this, an entire body of highly creative work would be effectively foreclosed. Of course that is not to say that all mash-ups will or should succeed on a fair use defense; the level of creativity, variance from the original source materials, resulting commentary, and intended market will necessarily make evaluation particularized. In this regard, mash-ups are no different than the usual fair use case. However, in this particular case the Court has before it a highly transformative work that takes no more than necessary to accomplish its transformative purpose and will not impinge on the original market for Plaintiff’s underlying work.” 21

Here’s the problem with this analysis. What the Court has before it is a classic derivative work as described by 17 USC 106(2). This is the definition:

“A ‘derivative work’ is a work based upon one or more preexisting works, such as a translation, musical arrangement, dramatization, fictionalization, motion picture version, sound recording, art reproduction, abridgment, condensation, or any other form in which a work may be recast, transformed, or adapted.” 22

Remember, Campbell was a case of parody. The Court here has already ruled that OTPYBG is not a parody. There are certain free speech components to making a parody, and you have a right to free speech. You do not have a “right” to “transform” my work. Under the copyright act, that is my right. It doesn’t matter what the “emerging mash-up culture” thinks. Re-mixing is not a right. 23

Yet, the Defendants trumpeted this ruling against them on their website as a victory! 24 “Vindication” screams the headline. Later this was amended to note that only the trademark portions got dismissed, not the copyright claims, which of course, go forward.

So guys, right now, the only place you’re going to “boldly go” is back to the courthouse.