The facts of the story are as follows, and the precise nature of the facts is highly relevant here:

“The dispute stems from 2011, when [UK photographer David] Slater’s wildlife photography field trip to Indonesia produced a striking image of a smiling crested black macaque; another image shows it holding the camera. The story went viral, with Slater explaining that a group of macaques had taken over his equipment for a bit during the three days he spent in their company…Slater added that the primates took hundreds of photos, most of them out of focus. By far the most famous of them was the grinning female macaque’s “selfie” that was then licensed for use by many media outlets.” 3 And here it is: 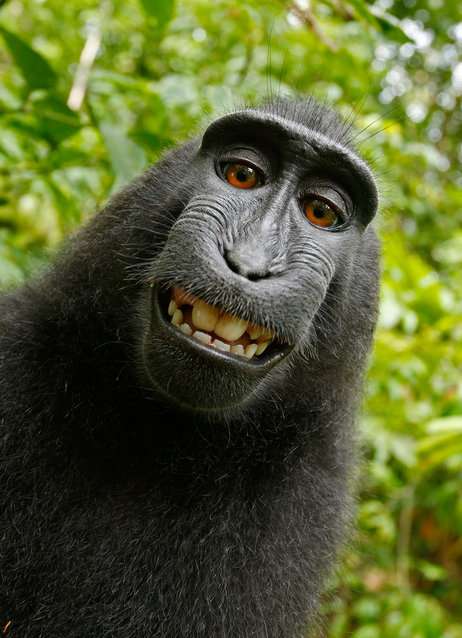 But here’s where the story gets interesting. Wikimedia has posted the photograph online as being free of copyright. The photographer has naturally objected.

“When Slater discovered that the monkey photo had been added to Wikipedia as a photo in the public domain — meaning it’s free for anyone to use in any way they see fit — he requested they remove it. Wikipedia refused, claiming that since the photo was actually taken by the monkey, Slater did not own the rights to it. A spokesperson for Wikimedia, the arm of the Wikimedia Foundation that hosts public domain photos, told The Huffington Post “It’s clear the monkey was the photographer. Because the monkey took the picture, it means that there was no one on whom to bestow copyright, so the image falls into the public domain.” 5

Slater, for his part, disagrees and is contemplating legal action. 6

What most commentators and media are overlooking is the important question of whose law is going to apply? This could have a significant effect on where the suit is brought, and who wins.

The United Kingdom belongs to the Berne Copyright Treaty, as does Indonesia. 7 The Berne Treaty provides that a work created by a citizen of a Berne signatory is treated on an equal basis of authors who are citizens of the country in which enforcement is sought, 8 if it is brought in a country other than “the country of origin.” 9 The “country of origin,” for purposes of Berne, is the country in which the work is first published. 10 Since Slater is a citizen of the UK, we will assume for the purposes of this discussion that the “country of origin” is the UK.

I am not at all conversant with the UK rules regarding jurisdiction over foreign entities. Though, if still current, this source says that Slater can sue Wikimedia in the UK and the UK courts will have personal jurisdiction if one of two theories is present: in a tort action, the damage was suffered or resulted from a tort committed in England (copyright infringement is a tort 14), or the action is seeking an injunction that the Defendant do or refrain from doing anything in England. 15

On the state of UK copyright law, the UK website ITV.com had this to say:

“ITV lawyer and author of The Law of Photography & Digital Images, Christina Michalos, said: ‘Unfortunately for the monkey she doesn’t own the copyright in her photographs. Only a person or in some circumstances, a company can be a copyright owner. However, under UK law where an artistic work is generated by a computer, the person who makes the arrangements for creation is the copyright owner. Computer generated is narrowly defined in our law as meaning “without human involvement. It is arguable that the photographer is the owner on this basis or in equity – in other words on the grounds of fairness – because he owned the equipment and presumably had set up the camera for optimal focus and light in the jungle.’” 16

But, if the UK courts decline to exercise jurisdiction, Slater may have to sue in the United States. While the outcome in the US in not clear, I would say his chances are not good.

Remember that according to the United States Supreme Court, the copyright act requires “only that the work was independently created by the author, and that it possesses at least some minimal degree of creativity.” 17 Just how minimal this degree of creativity can be and still qualify for copyright protection is the point on which this case will turn. The mechanical act of pressing the shutter button is not artistic creativity. As this case makes clear, even a monkey can do that. It is what happens before the shutter is pressed that is creative: the choice of subject matter, the lighting, the exposure settings, the framing of the subject; these are the artistic choices that grant a photographer the copyright in the photographs. So, the Wikimedia spokesperson is incorrect. That the monkey took the picture is irrelevant as to who owns the copyright. The question is, what creative choices did Slater make and did they contribute anything to the final photograph?

Slater’s claim would be the strongest if he had “primed” the camera, that is, set the exposure, aperture and speed in order to capture the best photograph given the conditions, and then handed it to the monkey to fool around with to see if it would produce interesting results. That would be a creative choice that would be enough to satisfy the “minimal degree of creativity” standard. But he didn’t, and the story that the monkey grabbed the camera is already on record.

So, Slater needs to build a case around the creative choices he made to make the resulting picture possible. Did he adjust the settings on the camera to optimize the results given the jungle location? If he did, his contribution might qualify as “minimally creative.” Did the fact that he travelled to Indonesia and selected this troop of macaques as photographic subjects constitute enough of a creative choice? He photographed them for three days. 19

But the case may come down to these questions. Did he try to take the camera away from the monkey and fail? Did he not try to take the camera away from the monkey because he was afraid of being injured in the process? (As you can see from the photo on this webpage, they are quite large animals. 20) Or did he make a conscious decision to let the monkey keep the camera and see if anything interesting resulted? That last factor may qualify as a conscious creative decision that nudges his contribution into the “minimally creative” realm. This indeed may have been what occurred. According to Slater, the monkey took hundreds of photographs, most of which were unusable. 21

In sum, Wikimedia will have to show that the entire creative input into the photograph was done by the monkey, and Slater had nothing to do with it. If Slater had any creative input, even a little, then he has a valid copyright.

Of course, if he had just given the monkey a banana, he would have owned it as a work for hire.