It was, therefore, not unexpected that Dua Lipa’s 2020 hit “Levitating” attracted a copyright infringement lawsuit. What was unusual was that two separate lawsuits were filed within a week of each other. The first alleged that “Levitating” lifted from Florida reggae group Artikal Sound System’s 2017 song “Live Your Life.” The second alleged that the 1979 disco song “Wiggle and Giggle All Night” had been copied by “Levitating.”

Most of the commentary has focused on how similar the songs are, and whether these similarities are the result of commonly used musical tropes, which we will discuss later. But before we get there, the primary question, as with all copyright infringement lawsuits, is the question of access. How did the songs in question get into the ears of the “Levitating” songwriters? Because you can’t copy what you have never heard.

According to a recent decision in the Southern District of California:

“To overcome a defense for failure to state a claim on access grounds, ‘a plaintiff must show a reasonable possibility, not merely a bare possibility, that an alleged infringer had the chance to view the protected work[s].” (citation omitted) Where the plaintiff lacks direct evidence of access, such a showing can be made on a circumstantial basis. (citation omitted) Indeed, access may be inferred “through either evidence of a ‘chain of events … between plaintiff’s work[s] and defendants’ access to th[ose] work[s]’ or evidence that ‘the plaintiff’s work[s] ha[ve] been widely disseminated.’” 3

Clearly, Artikal Sound System is pursuing the latter theory of access. The complaint states that “‘Live Your Life’ was commercially released on CD Baby in 2017 and appeared on a variety of streaming services including Spotify, Pandora, Apple Music, Amazon and Sound Cloud.”

But is that enough? It does not appear so.

“The Ninth Circuit has previously stated that[,] although [it] recognize[s] the power of the internet to reach a wide and diverse audience, [internet presence is not necessarily] sufficient to demonstrate wide dissemination.” 4

“Put differently, that a work has the capacity to reach anyone with an internet connection by virtue of its presence on the worldwide web renders it merely possible, not reasonably possible, that the alleged infringer viewed that work.” 5

However, Artikal Sound System alleges that the album that contains the song LYL charted on “Billboard Charts at number 2 in the reggae section in 2017.” Note that the complaint states the song appears on an album that charted. Not that the song itself charted. Is this enough?

“In most cases, widespread dissemination centers on the degree of a work’s commercial success and on its distribution through radio, television, and other relevant mediums.” 6

“[A]lthough the Ninth Circuit has not identified a specific threshold for the level of public engagement with a work that constitutes ‘wide dissemination,’ its precedent indicates that a work’s degree of commercial success and/or notoriety must be substantial.” 7

These instances, however, failed to meet that threshold:

I suspect Plaintiff’s counsel sees this flaw and in turn relies on the theory of “striking similarity,” stating in the complaint that “[g]iven the degree of similarity, it is highly unlikely that ‘Levitating’ was created independently from “Live Your Life.’”

And on first blush, he may be right.

Here is the song “Levitating.” The passage in question starts at 0:23.

Here is the song “Live Your Life.” You’ll notice the similarities right away. But things get really serious at 0:20.

That’s because, apart from the lyrics, the two songs are virtually identical.

Thanks to YouTuber Rick Beato, we have a clear picture of what is going on here. 10

That’s because the melodies are virtually identical.

So as a matter of musical theory, could the confluence be accidental?

According to YouTuber Adam Neely, the answer is “yes.” 11

He points to the 1998 song “Rosa Parks” by Outkast. Same chords. Same melody. Relevant section starts at 3:33 and runs to the end of the song.

Neely also points to a 2020 podcast “Sound Exploder” Episode 194 dedicated to the creation of the song “Levitating.” It presents audio recordings showing “Levitating” being created in the studio, most of it by improvising.

Which brings us to the other case, involving the song “Wiggle and Giggle All Night.” Here is the song, which correlates to the beginning of “Levitating.”

Indeed, very similar at the first hearing. The complaint has saved me some time by offering up a transcribed comparison. N.B. the reference to “DD” stands for “Don Diablo” a song that was successfully sued for infringing the same melody, and which Plaintiffs now own. 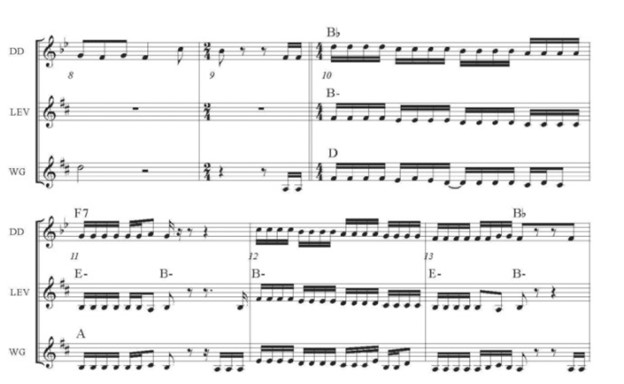 The similarities start with the keys. “Wiggle and a Giggle All Night” is in D Major, “Levitating” is in B minor, but as any musician would tell you, B minor is what is known as a relative minor to D major. This means that they share the same scale, merely with different starting points.

But, “Levitating” starts on F# (the fifth note of the scale) and works its way down in a series of staccato sixteenth notes to B, the tonic or first note of a scale.

So, beyond the similar ideas of a series of sixteenth notes, descending one interval at a time along the same scale, the notes are actually harmonically different in relation to the key they are in. A non-musician, or a judge, or a jury, might not recognize this.

“Defendants had reasonable access to [Plaintiff’s] songs, which can be found on popular streaming services including Spotify, Pandora, Amazon Prime Music and YouTube.”

But as we saw before, just because you’re on the internet, doesn’t equal access for copyright purposes. But also:

“As a part of the Sony Music Family, Defendants also have access to the [Plaintiff’s] songs, which were published by labels now under Sony’s umbrella.”

Yes, and that was 40 years ago. How many thousands of songs has Sony released in the interim? WAGAN was released in 1979. Don Diablo in 1980. Dua Lipa would not be born for another 15 years. How did she, or her co-composers, hear the song? The complaint does not say, and offers no reasonable theory of access, other than WAGAN charted briefly in the Netherlands and “Don Diablo” was performed at a music festival in Chile in 2018 and was used in an advertisement for a South American Department store.

Remember “[t]o overcome a defense for failure to state a claim on access grounds, ‘a plaintiff must show a reasonable possibility, not merely a bare possibility, that an alleged infringer had the chance to view the protected work[s].” 12

“There are number of songs that share similar chord progressions, most notably the campy 2002 pop hit “Asereje (The Ketchup Song)” by the Spanish girl group Las Ketchup, [and]  “Şımarık,” a 1997 song by Turkish singer Tarkan.” 14

To hear those songs, follow the link in the endnote to Aaron’s page, where he has links to the songs in question.

So, given that at least two other songs have similar musical motifs, the melody of WAGAN is not particularly original. To the two songs cited by Moss, I can add “Hocus Pocus” by the Dutch band Focus, a hit in 1973 (reaching #9 on the Billboard Hot 100), of which the “yodeling” section has the same basic idea as WAGAN.

Doubtlessly, the Defendants here will deny that they have ever heard the songs in question, which if true, eliminates the possibility of copyright infringement.

Plaintiffs here will counter by stating that the works are so similar that they could not possibly have been created independently.

Which begs the question: Why are there other songs with the same melody?