Nations that are signatories to the Berne Copyright Treaty are obliged to recognize the “moral rights” of authors. That is:

“Independently of the author’s economic rights, and even after the transfer of the said rights, the author shall have the right to claim authorship of the work and to object to any distortion, mutilation or other modification of, or other derogatory action in relation to, the said work, which would be prejudicial to his honor or reputation.” 1

However, the United States is not one of those that recognize moral rights. Instead, the U.S. Copyright Act has a half measure, the “Visual Artists Rights Act.” 2 It provides that:

“(a) Rights of attribution and integrity.–Subject to section 107 and independent of the exclusive rights provided in section 106, the author of a work of visual art…

(3) subject to the limitations set forth in section 113(d), shall have the right–

Note that operative language only applies to works of the “visual arts” and that the work must be of a “recognized stature.”

But in July of 2022, the District Court for the Northern District Court of California, in the case of Canilao v. City Commercial Investments, LLC. ruled that the VARA did not apply to one particular form of visual art: graffiti. 3

The facts are undisputed.

However, the Stud suffered debilitating losses as a result of the COVID-19 pandemic and related ‘stay-at-home’ orders issued, and, on or about May 31, 2020, the Stud closed its doors after 54 years in business. After announcing the bar’s closing, the operators of the Stud, Handsome Heidi, allegedly requested information from Defendant CCI about its plans for the building, ‘specifically noting that if the building was to be demolished that community members were interested in the façade being saved, preserved and moved; or that pieces of the building could be distributed.’

The Stud ‘moved out on the eve of June, which is LGBTQ pride month…[and} the 50-year anniversary of the city’s historic Pride Week celebration…

On June 20, 2020, Plaintiff allege that CCI began to paint the building white, and then beige. Plaintiffs allege that the ‘moment [CCI] began whitewashing and erasing the Artists’ Murals, people on the street asked them to stop, but they refused.’ As news about the ‘destruction’ of the murals spread, Plaintiff there was an ‘outpouring of emotions and stories throughout the community’ as reflected in coverage by a number of news media outlets, including ‘Kron 4 News, SFGATE, [and] the SF Chronicle.’” 4

If this sounds familiar, it should. This is almost exactly the same fact pattern as the case of Cohen, et al v. G&M Realty L.P.,where a New York court ruled that whitewashing over murals painted on the side of a building known as “5Pointz” was a violation of VARA and awarded $6.5 million in damages. 5

But here, an almost identical case doesn’t even make it past a motion to dismiss.

In the 5Pointz case, not only did the owner of the building consent to the artwork installation, but invited artists to paint there, and hired a curator to oversee the work.

Here, the Plaintiffs did not sufficiently allege that the property owner, CCI, consented to the painting of the artwork, apart from the apparent consent of “Handsome Heidi” who operated The Stud bar. Below are some examples. 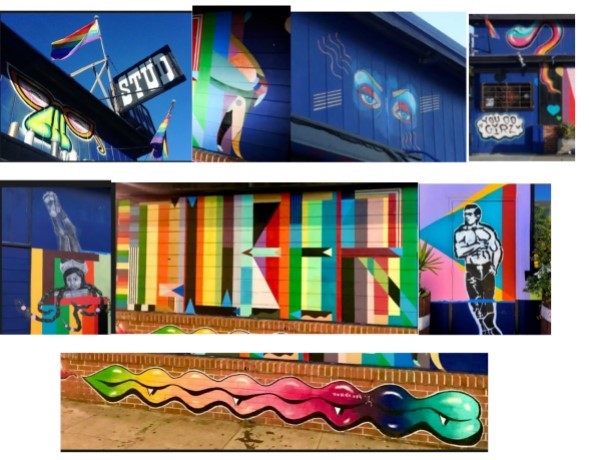 The Court, even though “consent of the owner” is not mentioned in the text of the VARA, reads it as a necessary element for a VARA claim based upon placement on a building to proceed.

“The Court finds compelling the reasoning and conclusion in English [ v. BFC&R E. 11th St. LLC, …1997 WL 746444, *4-5 (S.D.N.Y. Dec. 3, 1997)] that 17 U.S.C. § 113(d)(1) implies that an artist must have obtained permission from the building owner in order for VARA’s protections to attach to their installation of a non-removable artwork on a building. Reading § 113(d)(1) without a permission requirement would allow an artist to gain domination over a building by affixing a nonremovable, permanent work of art without the consent or knowledge of the owner. This could leave the building owner with a dilemma if it needed to maintain their building (such as to apply a protective coat of paint to preserve integrity of the wall, or perform rehabilitation affecting exterior walls necessary for safety or code compliance) or alter or deconstruct the building because of e.g. obsolescence. Absent consent of the author who installed the art without prior knowledge or consent of the owner, the building owner could be barred from doing the necessary work, at least for the life of the artist.” 6

“In light of the foregoing, the Court concludes that § 113(d)(1) of VARA implies a requirement that an artist obtain the consent of a building owner for VARA’s protections to apply to a nonremovable artwork installed on a building. As discussed above, there is a strong logical basis to read in this implied requirement into the statute, and such a requirement is not inconsistent with the text of the statute.” 7

So, building owners, the fact that someone has trespassed during the middle of the night and applied graffiti artwork to your building, does not negate your right to do with the building as you please.