Sophistry is a word that doesn’t get used much these days, but it should. It is especially useful when engaging in arguments on the internet, where false and misleading statements are frequently the entire basis on which an argument rests.

Sophistry can be defined as: 1

2) An argument that seems plausible, but is fallacious or misleading, especially one devised deliberately to be so.

It has become very fashionable among the anti-copyright forces to deny that copyrights are property. This denial has the instant effect of devaluing copyrights as a societal good. Which is exactly the intended effect.

According to the Electronic Frontier Foundation, copyrights and indeed all intellectual property aren’t really property, they are some kind of pseudo-property 2 and do not deserve the same kind of protection afforded other property such as real property.

“Copyright is a limited set of rights that gives the owner the ability to prevent the public from making some uses of creative material for some length of time.” 3 …“[T]he use of the word “property” to tie these disparate areas of law together can mislead lawyers, judges, policymakers, and interested citizens into thinking that copyrights, patents and trademarks should be treated like real property.” 4

This line of thinking can be traced back to law professor Lawrence Lessig, who is a “close ally” of EFF and was formerly on the EFF’s Board of Directors. 5 According to Lessig “IP is not P, but this truth is lost on us.” 6

So are they right? Well, of course not.

The Copyright Act itself says copyrights are property. You would think something as obvious as this would not escape their notice, but apparently it has. The Copyright Act at 17 USC 201 (d) (1) states the following:

“The ownership of a copyright may be transferred in whole or in part by any means of conveyance or by operation of law, and may be bequeathed by will or pass as personal property by the applicable laws of intestate succession.”

So not only does the Copyright Act state that copyrights are property, the law as a whole treats copyrights as property. Consider:

The truth is, that concept of intellectual property as the equivalent of tangible property has been settled for hundreds of years in American jurisprudence.

As Law Professor Adam Mossoff points out, courts have been consistently treating IP rights as equivalent to real property rights for just under 200 years. 11 “In 1817, Justice Bushrod Washington …explained that infringing a patent is ‘an unlawful invasion of property.’” 12 Even more plainly, a judge in 1846 held that “[a]n inventor holds a property in his invention by as good title the farmer holds his farm and flock.” 13 As early as 1694, John Locke “expressly identified copyright as an authors’ ‘property’ in a… memorandum.” 14 Mossoff’s research also concludes that “[t]here was widespread agreement among judges and lawyers, …that common law property concepts and doctrines applied to patents.” 15

So why engage in such silly sophistry? Because the argument they really want you to swallow is that since copyrights aren’t really property, then copyright infringement is not equivalent to theft.

This absolutely defies all logic and reasonable analysis. This is silly sophistry at its most obvious. Let’s start with the dictionary:

Beyond the dictionary, how in the world did the EFF miss the quote from Justices Breyer, Stevens and O’Connor that I just cited? Here, I’ll repeat it:

Or perhaps they missed these citations by the Justices that immediately follow the quote:

Or perhaps they missed this quote from the 9th Circuit Court of Appeals:

“Having taken the copyrighted material, Timex is in no better position to haggle over the license fee than an ordinary thief.” 20

Or perhaps they missed this quote from Federal District Judge Larry Hicks:

“There is no meaningful distinction between “theft” and “copyright infringement” in the Ninth Circuit.” 21

The EFF is headquartered in San Francisco, California, which is in (ahem) the jurisdiction of the 9th Circuit Court of Appeals.

This is not a difference of opinion. The EFF is stating categorically that “… copyright infringement isn’t defined in law using…the same legal standards as theft or larceny,” when three Justices of the SCOTUS, the United States Criminal Code, the 9th Circuit Court of Appeals and a Federal Judge all state categorically that it is. What is the best thing that can be said about the EFF’s statement? “The deliberate use of a false argument with the intent to trick someone,” or “sophistry” sounds about right.

As they say on TV…but wait, there’s more.

The quote from Justices Breyer, Stevens and O’Connor did not occur in a vacuum. Not only was MGM v. Grokster one of the most closely watched copyright cases in recent memory, but the EFF was actively involved in the case. The EFF represented StreamCast, an American corporation that created the Morpheus peer to peer file sharing software, and was a defendant in the suit. 22 This included briefs and argument before the U.S. Supreme Court. 23 Yet we have the EFF, a direct participant in the case, pretending that a concurring opinion equating copyright infringement with “garden variety theft,” in a case they lost 9-0 before the Supreme Court of the United States, does not exist.

As they say on TV…but wait, there’s more.

The EFF claims they won the Grokster case.

Yes, that’s right, the EFF claims as a legal “victory” a case that it lost 9-0 before the Supreme Court of the United States. To find it, go to the EFF home page at EFF.org, and click on “About.” At the bottom of the page you will see a link to “Historic Court Victories.” Click on that, and scroll down to the case of MGM v. Grokster. 24 The Supreme Court unanimously ruled against the position the EFF took before the Court, and ruled that their client could be held secondarily liable for inducing copyright infringement, stating “[t]he unlawful objective is unmistakable.” 25 Within 3 years, StreamCast was bankrupt, and is longer in business. 26 This is a victory? The EFF seems to think so. In case they get embarrassed and remove it, here is a screen shot that shows the listing. 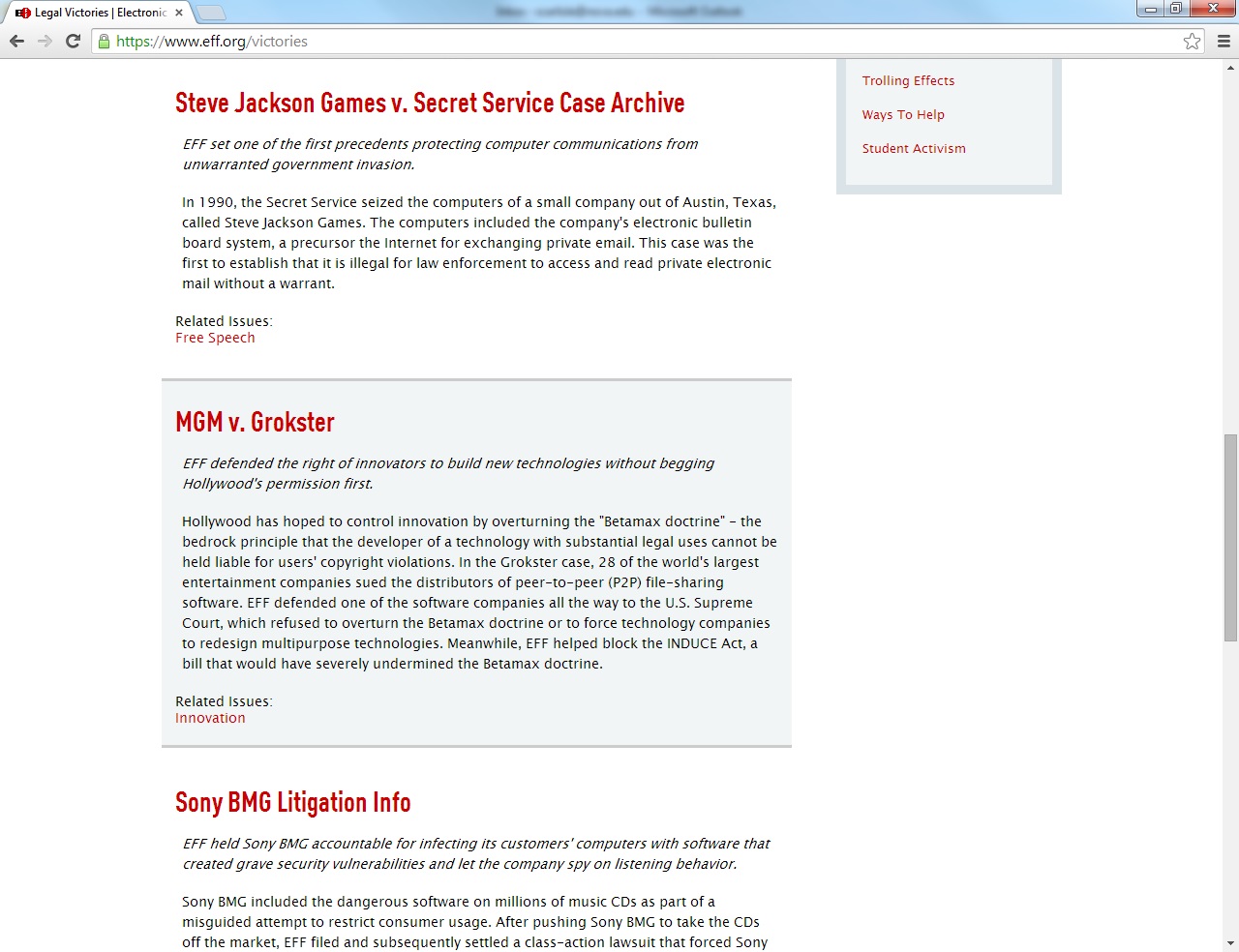 I should think that any legal organization that claims as a “victory” a 9-0 smack down at the Supreme Court tells you everything you need to know about the honesty and believability of that organization. Indeed, it is silly sophistry in its most indelible form.