The folks over at Digital Music News have had a busy week. They have uncovered not one, but two previous musical compositions that sound an awful lot like the opening guitar melody to “Stairway to Heaven.” 1 This riff is the subject of a rather heated court battle between the Trust of Spirit guitarist Randy California (real name Randy Wolfe) and Jimmy Page and Robert Plant of Led Zeppelin. 2 The part where it gets interesting is that one musical composition is so old it is in the public domain.

That composition, “Sonata di Chittarra, e Violino, con il suo Basso Continuo,” is by Giovanni Battista Granata, and dates from the 17th century. No need to listen to the entire song, the relevant part occurs at 0:32.

The other composition is “Cry Me a River” by British guitarist Davy Graham. The familiar riff appears several times in this film which dates from 1959.

For comparison’s sake here is the song “Taurus” by Spirit.

And the song that should need no introduction, “Stairway to Heaven”:

To my ears, the song “Taurus” bears the least resemblance to “Stairway To Heaven” followed by “Cry Me a River” and then “Sonata di Chittarra, e Violino, con il suo Basso Continuo,” in which the noted section seems very similar to the famous Led Zeppelin classic.

And it’s in the public domain! But does this get Jimmy Page off the hook?

Not necessarily. The key here is the doctrine of independent creation. One can have a copyright in a work against another work that is very similar, as long as one was not copied from the other. This is what got the Bee Gees out of a copyright infringement suit over “How Deep Is Your Love.” Said the Court:

“Proof of copying is crucial to any claim of copyright infringement because no matter how similar the two works may be (even to the point of identity), if the defendant did not copy the accused work, there is no infringement.” 3

So, if Jimmy copied Giovanni Battista Granata, then there is no infringement. But currently there is no evidence that Jimmy was aware of the composer or the musical composition in question. “Taurus” is a different story. As reported by The Hollywood Reporter ESQ:

“Page has admitted that Spirit’s album was in his record collection, but maintains there are many albums he’s collected that he hasn’t listened to. The defendants also admit that the two bands appeared at the same venue on the same day on multiple occasions, but assert there is no “chain of events” establishing that Led Zeppelin’s members heard the Wolfe song.”

Page has been dogged for years with accusations of plagiarism. So much that the Wolfe Trust wishes to bring it up in court. 4

“[Plainitff’s attorney] writes that Page and Plant admitted in depositions to routinely taking other people’s songs. Among the works that have come up include ‘Dazed and Confused’ (allegedly derived from Jake Holmes), ‘Whole Lotta Love’ (allegedly Willie Dixon by way of The Small Faces) and ‘Babe I’m Gonna Leave You’ (allegedly Anne Bredon from a song sang by Joan Baez).” 5

“’There is no way any rational reasonable person listens to these songs and can conclude anything but that they were lifted, as Page and Plant admitted,’ states a legal brief. ‘There is no other band in rock history who has been compelled to change the writing credits on its songs so many times, as Plant admitted at his deposition.’” 6

But Page is also said to be a big fan of Davy Graham as well. According to Digital Music News:

“Jimmy Page has cited Davey Graham as an influence.  Indeed, Graham is regarded as a highly influential and genre-pushing artist, and oftentimes credited with driving a resurgence in folk in 1960s Britain.  As an instrumentalist, his guitar-plucking style has often been imitated, especially by artists of the 60s and 70s.” 7

So what if the person Page copied wasn’t Randy Wolfe, but Davy Graham?

This would get him off the hook from copying “Taurus,” but it might mean a potential lawsuit from Graham’s heirs, since he died recently, in 2008. 8 So a last minute admission of this sort would be unlikely.

But what of Randy Wolfe? Is it possible he copied from Davy Graham?

Possible, but since he’s dead we cannot go back and ask him.

Which leaves Jimmy Page two remaining strategies, outside of the outright denial, of course.

The first is the question of substantial similarity. The Wolfe estate must prove that the two songs are substantially similar to each other. 9 The problem is, “Stairway to Heaven” is a long song (8:02 in fact) and has many portions that are not similar to “Taurus” at all. Indeed, starting with the lyrics “If there’s a bustle in your hedgerow…” on through the heavy final section, there is little to no similarity between the two.

There is, however, the legal concept of “fragmented literal similarity.” This is defined as “where … parts of the pre-existing work are copied … note for note …, [t]he similarity, although literal, is not comprehensive.”  Put slightly differently, “[f]ragmented literal similarity exists where the defendant copies a portion of the plaintiff’s work exactly or nearly exactly, without appropriating the work’s overall essence or structure.” 10

But, comparing the two, IMHO, “Stairway” and “Taurus” are indeed similar, but not close enough to get Plaintiff’s to the point of proving “fragmented literal similarity” which would require a “nearly exact” copy.

So let’s bring back “Sonata di Chittarra, e Violino, con il suo Basso Continuo,” and factor that into the mix. The fact that this song is in the public domain, does not immediately place “Cry Me a River,” “Taurus” or “Stairway to Heaven” in the public domain, but does weaken the copyright protection afforded them.

For assuming that neither Wolfe or Graham were aware of this 17th century musical composition, and Wolfe was not aware of Graham’s composition, this would mean that three different composers (four if you count Jimmy Page) came up with very similar melodies using arpeggiated chords. This would indicate that the melodies themselves are kind of “stock” motifs that naturally would follow from using standard rules of  European musical theory, and really should receive little, if any, copyright protection.

According to this website, both “Taurus” and “Stairway to Heaven” are “based on a commonly used A minor descending chromatic walk.” 11 It goes on to state that the songs are “vastly different in composition and complexity. Only an amateur would confuse them for the same song.” 12

For comparison, here is the guitar tab for both “Taurus” and “Stairway to Heaven”. 13 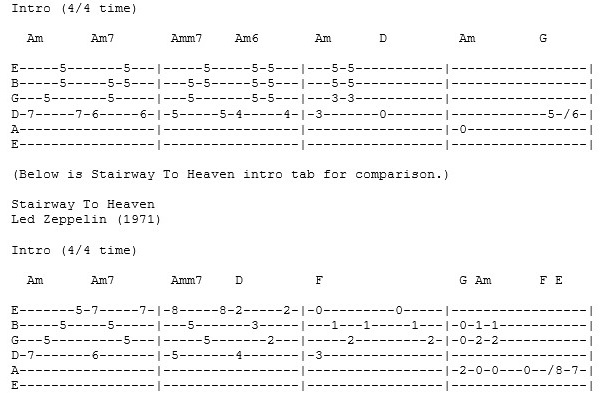 In other words, “Taurus” was not the only source from which the melody could have emanated. Jimmy Page could have composed “Stairway to Heaven” without reference to either “Taurus” or “Cry Me a River,” because it uses fairly standard techniques and harmonic progressions.

As a songwriter myself, I can assure you that composing is a mysterious process, in which the brain guides you in both conscious and unconscious ways. It is very possible that Jimmy Page had heard “Taurus” or “Cry Me a River” (or both) and simply did not remember it when composing “Stairway to Heaven.” As George Harrison found out, it’s still copyright infringement, even if done unintentionally and subconsciously. 14

The Harrison case is further worth noting in that it shows us what substantial similarity really is. Taken side by side, it is clear that they are the same song with different lyrics.

I cannot say, in my experience, that the same is true for “Taurus” and “Stairway to Heaven.”

I have been wrong before, the “Blurred Lines” case being the most recent example. 15 Yet, as I discussed that verdict with an old attorney friend, and fellow musician, we both uttered the same thought at nearly the same time…

“Gosh, there are only 12 notes in an octave to choose from.”

Given that limited a palette to paint from, similarities are bound to occur.